PMU encapsulation is a well-established technique to protect volatile components in durable microcapsules that are thermally stable and insoluble. 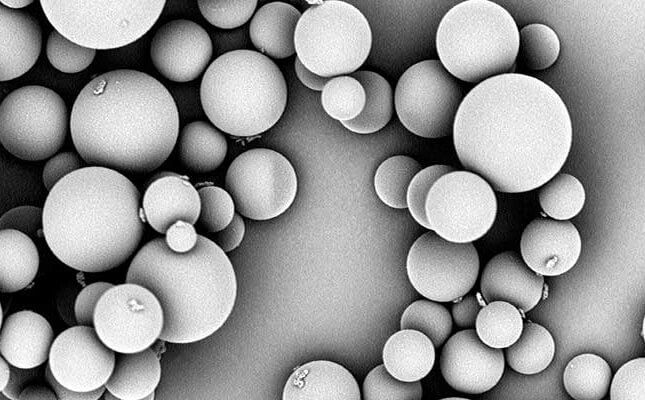 What is PMU Encapsulation?

PMU (PolyoxyMethylene Urea) encapsulation, also known as urea-formaldehyde and urea-melamine-formaldehyde encapsulation, is an emulsion technique used to produce durable core-shell microcapsules with good retention of volatile components. This technique is widely used for the encapsulation of fragrances, cosmetic oils and industrial chemicals. PMU encapsulation is ideal for protecting hydrophobic liquids (i.e., oils) and is called for when capsules must be very small (10-70 µm), thermally stable and have insoluble shells.

Process
PMU encapsulation is done by emulsifying the material to be encapsulated in an aqueous solution and then depositing a tough polymer coating on the droplet. The core material must be mostly insoluble and fairly non-reactive with water, oils and other hydrophobic liquids, as well as some solids and powdered materials. AVEKA has the expertise to design and formulate PMU capsules in our laboratory and then scale to batch production.

The capsule size and shell strength can be varied by controlling process parameters, including:

Typical Core Materials
Hydrophobic materials with melting points below 50°C, such as mineral oil, fragrance oils, waxes and some industrial chemicals, are often encapsulated with PMU. Any liquid with slight miscibility in water, low viscosity and a pH near neutral can in principle be used as a core with this method. Mixtures of hydrophobic liquids are often encapsulated together. In addition, some solid particulate material can be encapsulated with PMU, as long as it is stable in water at low (acidic) pH values.

Capsules
PMU capsules are true core-shell microcapsules. Depending on the material, core loading can be up to 80 wt% of the capsule. Capsule size can be varied between 10 and 70 µm.